Book Review – The Mercury 13: The True Story of Thirteen Women and the Dream of Space Flight 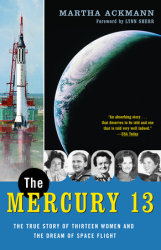 Apologies for the long silence here recently.  Work travel schedule has been a little crazy – in fact, there was only one day this week where I was not on an airplane.

But all this travel afforded me some good audiobook listening time in the various car and airplane rides, so I finally got around to one that has been on my list for ages.  I have wanted to learn more about the Mercury 13 for quite a while, so I used one of my stacked-up Audible credits to pick up The Mercury 13: The True Story of Thirteen Women and the Dream of Space Flight by Martha Ackmann.

Written with a beautiful forward by journalist (and NASA journalist in space finalist, before that program was canceled) Lynn Sherr, the book tells the story of some incredible pioneering women in the early days of manned spaceflight.  Their stories are interwoven with political and social context of the times, giving excellent perspective on what was happening – and why- with astronaut selections.

It’s amazing to me just how close we came to having a female astronaut in the early days of the Mercury program.  The Lovelace Foundation privately put thirteen women through the same testing as the male Mercury astronauts, and they excelled.  In many cases, the blew the men out of the water with their performance on those tests.  Mary “Wally” Funk, for example, stayed in the sensory deprivation chamber for a record-setting 10 hours, 35 minutes.  There was also a strong argument for using astronauts who were smaller and lighter in a time when the U.S. space program was having difficulty getting larger payloads to orbit.

The frustrations, challenges, and – in many cases – outright sexism and unfairness did not deter these women.  They continued their personal careers pioneering as champion air racers, military reservists, FAA examiners, flight instructions, and commercial pilots, while also hoping and fighting for the chance to go to space.  NASA’s blanket policy of only using military test pilots unilaterally barred women.  Since women were not allowed to be military test pilots, none would ever pass that wicket  – NASA didn’t need to specifically say “no women allowed,” they just had to include a prerequisite that already said it for them.  The all-white-protestant-male face of NASA would not change for many more years, but it’s important that we don’t forget that there were women who were more than qualified and fighting to go.

The program was kept pretty quiet at the time, and so has almost been lost in history.  I think it’s important to remember these stories.  This book is a well-told story of some amazing women.  I strongly recommend reading this book as a fascinating piece of our history with examples of amazing female role models, and a good story of fighting for equality for all.

What do you think? Cancel reply